Why of the day! 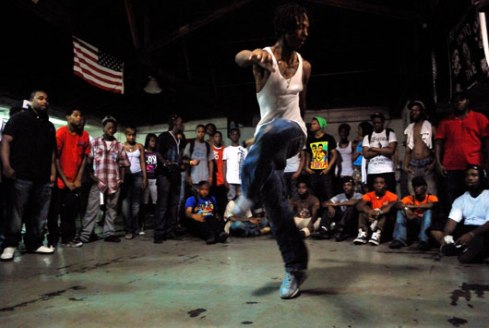 Why do I like Juke? I guess because I like Chicago house! When Addison Groove did Dumbshit (Footcrab‘s B-side) two years ago, it was a revelation. I remember back then, I still was skeptical about most post dubstep music, but the review mentioned 808 and 909 beats, so I checked it out. It sounded like the most successful mutation I’d heard in a long time. I was already getting mad energy from the Chicago resurgence with Traxx, JTC, D’Marc Cantu & co, but this took me by surprise as I wasn’t that much into the faster Dance Mania joints, too hectic for my tastes, mostly. Addison Groove slowed down the juke to 135-140 BPM and put it on the map, making it mixing friendly in the most noble way : you can mix his stuff with disco, 135 BPM, the origin of all house! But going back a little, I can also see a few other loves of mine, like Miami bass, the quest for a fully accomplished track with nothing but a drum machine, dancing with your mind off and your body on, looking like a fool but not carrying the slightest as long as your feet touch the floor 135 times a minute. Spinn and Rashad are the current gods of juke/footwork (thanks to the attention Addison gave them), but it’s already going further then expected with the Shangaan electro going 175-180 BPM and embracing a similar minimalistic aesthetic, basically a testament to house’s versatility. Anyhow, here’s a closer examination to the phenomenon, a less subjective one. Be thankful, you got both!

Speed it all up :

Oh, and also this : from disco to juke back to disco!